Junior Infants have had great fun practising their maths skills. They are great at working together to solve problems and talk about the different activities. These active maths sessions have helped the pupils revise all the maths they have learned during Junior Infants. The photos below show some of the exciting tasks they have been working on. 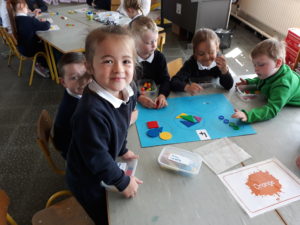 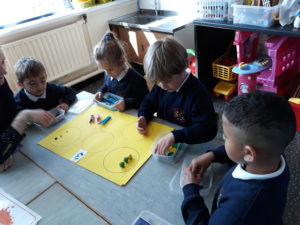 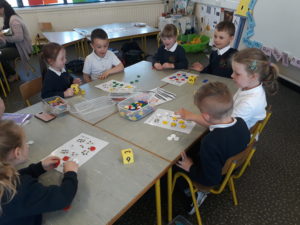 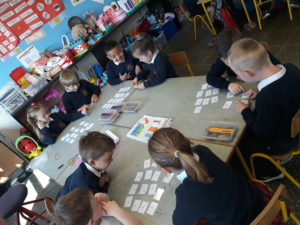 Maths Week was held between the 13th and 21st of October. The whole school were involved in various activities during the week.

This year we focused on using our ‘Maths Eyes’ and encouraged the pupils to find maths in our environment. Thank you to parents for the huge effort they made. We were sent in great photos and the pupils enjoyed looking at the display all week. We are going to keep our ‘Maths Eyes’ working so please feel free to send in photos anytime to add to our already extensive display.

We also learned a lot about each other during Maths Week, as each class created a data chart on which they recorded a variety of their favourite things, these included toys, fruit, shapes, Halloween characters and many other topics.

Other activities included putting their problem solving caps on each day to solve the ‘Problem of the Day’, using their estimation skills to guess the amount of ‘Pastas in the Jar’, as well as going on a Maths Hunt around the school.

It was great to see such interest and enthusiasm with regard to maths. Let’s keep our Maths Eyes open and remember that maths is everywhere.

Maths Week took place between the 14th and the 22nd of October. All the pupils were fully involved in the many activities that took place. Every class enjoyed a maths hunt around the school yard. Infants were busy finding shapes and numbers while the older classes had to answer a variety of questions based on their school environment.

There was great fun making patterns with cubes, beads and bears. Many classes worked as part of a group to create a variety of 2-d shapes using their bodies. They were able to make regular and irregular shapes.

A pupil from each class was awarded, ‘Mathematician of the Week’, this was for their effort and participation throughout the week, solving the maths problem of the day, creating a maths-based piece of art and being an active mathematician all week long.

You can see some of the pupils work in the pictures below. Well done to all the pupils and let’s continue to be ‘Marvellous Mathematicians’ all year long!

Robertson Low Insurances Limited are holding this lovely colouring competition for children under the age 12!

The theme is “Under My Sky” with lots of scope for beautiful art works! We know we have so many talented artists in this school and there are great prizes to be won! What have you got to lose?

Get planning and creating - a nice project for the weekend!
Check out the link below for all the details!

Children's Art Competition themed Under My Sky is brought to you by the Wholesale division in Robertson Low. Great prizes and for children of all abilities.
View on Facebook
·Share

Share on FacebookShare on TwitterShare on Linked InShare by Email

NEPS have updated their website with online resources and wellbeing advice.
www.gov.ie/en/publication/af24b-wellbeing-guidance-documents-for-parents-students-and-schools/#pa...

It is definitely worth a look, the daily plan is a great idea for any families who are finding it difficult to get a routine in place at the moment. Stay safe and take care everyone. ... See MoreSee Less

Share on FacebookShare on TwitterShare on Linked InShare by Email